Getsugakure (月隠れの里, Getsugakure no Sato; literally "Village Hidden under the Moon") is a hidden village in the Land of Moon. The Land of Moon literally consists of a crescent shaped island located at the far eastern end of the seas. The village itself it a large one and it well known these days for its prowess in medical advancements. It is said that they aquired one of the best hospitals in the known world and some of the most experienced medical nin.

The symbol recognized for Getsugakure has been the crescent moon for hundreds of years now. Though it wasn't a major village before the Gakure Purge, it has grown in recognition and status over the last 200 years, being one of the main suppliers for medical goods during the war itself. Recently, Getsugakure has taken an interest in hosting a small trading market located just beyond the mountain pass leading to the gates. A particular item it is  well known for is the Chochi fruit, which resembles the combined flavors of a strawberry, watermelon and a starfruit; being mildly tangy and overwhelmingly sweet.

The structure of this village is beautiful andmost of the buildings are still in good condition seeing as the island itself was not really touched during the Gakure Purge. Many refugees flooded from across the world, some settling here, including the Sarutobi clan, the current Kage's ancestors.

At the moment, Getsugakure is on peaceful terms with many of the Hidden Villages. 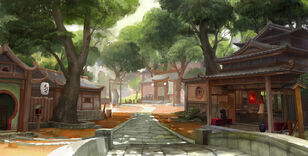 The Sarutobi Clan was a prominent clan of Konohagakure before the Gakure Purge, their members holding many positions of note, including that of Hokage and a member of the Twelve Guardian Ninjas. Sometime before the purge, members of the clan set sail for new lands in order to expand their clans influence and wisdom, settling in Getsugakure amongst one of the places. They are noted to be a powerful and wise clan who to this day, still carry the Will of Fire within them.

The Senju Clan was a group of shinobi that were the strongest, feared and most respected clan above all other clans in the ninja world during the war-torn era before the founding of the hidden villages. During the Gakure Purge, their reputation was re-recognized as a strong, determined people and the ferocity of their abilities were as impressive as they had always been. The Senju are relatives to the Uzumaki and to this day, their relationship is still a prominent one.

The Hyuga Clan was once one of the four noble clans of Konohagakure before the Gakure Purge. All members born into this clan possess the Byakugan, a kekkei genkai that gives them extended fields of vision and the ability to see through solid objects and even the chakra circulatory system, amongst other things, and expel chakra from any of the tenketsu in their body. Before Konohagakure fell, the current leader of the Hyuga made the choice to leave, forseeing its destruction and was labled a coward. In the end his decision preserved the Hyuga bloodline after the destruction of Konoha.

The Rinha Clan is a clan of specialists in medical ninjutsu. The kekkei genkai of the Rinha allows them to absorb a persons chakra and duplicate their appearance and memories. They performed admirably in past wars, including the Gakure Purge.

The Uchiha Clan was one of the four noble clans of Konohagakure, and was reputed to be the village's most powerful clan, producing shinobi that were exceptionally talented and battle-orientated. Following the Uchiha Clan massacre, the Uchiha slowly started to reappear, albeit slowly, and few of them are still found, although they reside here and there. A small family of Uchiha migrated to Getsugakure in the later years after Naruto's death and remained there since.

The Inuzuka clan was a family from Konohagakure who were best known for their use of Ninken as companions along with their clan's Hiden techniques, and the fang like markings on their face. Today, the Inuzuka can be found spread across the Land of the Moon, the lush forests and mountain ranges a perfect environment for raising their canine companions within.

The Namikaze clan hailed from the Land of Fire, and were renowned for their elemental affinity of lightning and breakneck speed. Over the years they have migrated to several parts of the world, including Getsugakure, where they are recognised as a strong and respected clan.

Community content is available under CC-BY-SA unless otherwise noted.
Advertisement